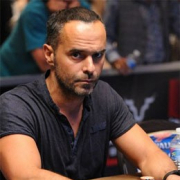 Before his successful move into acting, Michael Greco managed to secure himself a place at The Royal Academy of Dramatic Art (RADA) thanks, in part, to a performance in a Kiss tribute band called 'Kissed' which he had co-founded.

Michael Greco is an English actor and professional poker player. Outside of poker, Greco is perhaps best known for playing the role of Beppe di Marco in long-running and hugely popular English soap opera Eastenders. He has claimed in interviews that his acting background has given him the ability to give off false tells during poker games.

Michael Greco was mentored in poker by fellow English pro Marty Wilson - a Wolverhampton poker veteran who has finished in the money three times at WSOP events. Greco started out in poker by playing regular ring games, but later moved his focus to tournaments. He has participated in several major poker events including the World Speed Poker Open, the Monte Carlo Millions, and the 2005 Poker Million. He has also represented Team Italy in Party Poker's Football & Poker Legends Cup. His biggest prize to date is $248,855 which he took for finishing 3rd in the $1,500 No Limit Hold 'em event at the 2009 WSOP in Las Vegas.

By sheer coincidence, Michael Greco is also the name of the head of entertainment at Las Vegas's Palms Casino Resort.