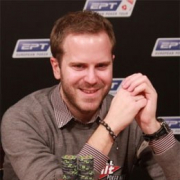 Swedish professional poker player Michael Tureniec began playing online poker in early 2004, having played lots of Black Jack and Chicago to develop his game. After his military service, and struggling to find decent work, he took a checkout job in a supermarket. During this time he and his friends started playing poker quite regularly, and Tureniec was increasingly successful in tournaments. In addition to Blackjack, Chicago, and tournament poker; Michael sought to supplement his supermarket cashier's wage with regular sports betting.

In 2006 he began playing poker professionally, and his great tourney performances have been consistent throughout. Michael Tureniec quickly took on even more tournaments of increasing size in the run up to the EPT London (October) - an event which saw him finish 2nd to take $961,902. He finished first in both the PokerStars.com EPT Copenhagen and Barcelona (Season 7) events to take total winnings of $914,016. His 2011 victory in Copenhagen represents one of his most substantial prizes to date, but 2012 has already seen him finish in the top fifteen of both the PokerStars EPT Copenhagen (Season 8), and Nordic Masters of Poker.

When not playing poker, Michael Tureniec likes to spend time with his friends at home either watching football (soccer) or movies. He travels the global poker tournament circuit, and always tries to take friends along to make the trips more fun.