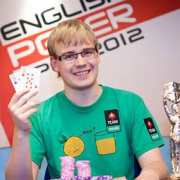 Mickey's PokerStars online alias mement_mori is from the Latin phrase 'memento mori' which loosely means: remember your mortality. Mickey accidentally omitted the 'o' because he was excited about the prospect of playing online poker.

Mickey Petersen found his way into poker, as many younger players have, through the fantasy card game Magic: The Gathering. He believes his crossing over from Magic to Poker can be put down to his competetive nature, but having also been a proficient Chess and Backgammon player meant Mickey was no stranger to the keen analysis that poker demands.

Mickey Petersen took a year off from his studies before starting university, but it was during this year that he became a proficent online poker player, making so much money that he aborted his plans to go to Uni. He is now one of the most succesful players his native Denmark has ever produced.

A member of Team PokerStars Online, Mickey plays as mement_mori and is a force to be reckoned with on the virtual felt. 2012 has seen Mickey make an impressive move from online to live tournament poker, taking down the EPT Copenhagen in February for $444,595; and the English Poker Open in September, beating seasoned pros Surinder Sunar and Chris Bjorin to win the crown and £78,660.