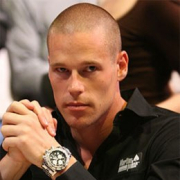 aka PA, Black Lotus, The Finn

Antonius was the first player to go up against Tom Dwan in Dwan's "Million Dollar Challenge". The challenge entails a 50,000 hands heads-up, but neither players have managed to clear enough time in their schedules to complete the challenge as yet!

Patrik Antonius is one of the most recognisable characters in poker today with an unquestionable amount of skill and an aggressive playing style. Antonius played poker with friends on a casual basis for years, but when he started playing online he very soon became determined to drastically and quickly improve his game. Mentored by Marcel Lϋske and Jennifer Harman, 2005 saw Antonius start to make a name for himself in poker after finishing twelfth at the World Poker Stars Caribbean Adventure, fifteenth in the Bay 101 Shooting Stars event, and successfully participating in several WSOP events.

Patrik Antonius is heads-up specialist, and plays regular online high-stakes games - from which he has won millions of dollars. In November 2009 Patrik Antonius won the biggest pot in online poker history - a whopping $1,356,946 - against Viktor Blom, who was at that time only known by his moniker 'Isildur1'. In addition to this unique achievement, Patrik Antonius can boast over $3 million in career tournament winnings.

Born in Helsinki, Finnish Antonius now resides in Monte Carlo with his two children and his wife Maya Geller. Before his pro poker career, Patrik was a tennis player and coach, and a model.