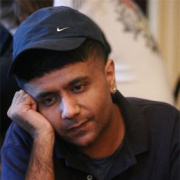 32 year-old Londoner and graduate of the University of Queen Mary Pramesh 'Praz' Bansi is a professional poker player who holds two World Series of Poker bracelets, has successfully cashed in every World Series of Poker tournament since 2006, and was named 'UK Player of the Year 2009' by Poker Player Magazine.

Having completed his degree, Praz Bansi spent five years working in recruitment consultancy before turning to poker full-time. Bansi has since admitted to spending most of his time in the office playing online poker before quitting and focussing on building his bankroll to head to Las Vegas.

2009 was by far the most fruitful and defining year for Bansi's poker career, with Praz winning the largest prize of his career (£360,887) by finishing third in the 2009 WSOPE $10,000 No Limit Hold 'em Championship Event. The year also saw Benzi clean up in Las Vegas, winning the $5,000 No Limit Hold 'em event at the Five Star World Poker Classic, and only two days later winning the $2,500 Super Satellite 2. The two victories saw him walk away with a total of $51,400.

As of 2010, Praz Bansi's live tournament poker winnings amounted to more than $2,3 million - nearly $1.5 million of which have come from WSOP cashes.