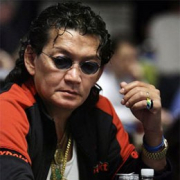 aka The Train, The Prince of Poker

Very sadly, the day after Scotty Nguyen's 2008 WSOP win, his brother was hit by a car and killed in Vietnam. For this reason Nguyen never wears his 2008 WSOP bracelet.

Born in Vietnam, Scotty Nguyen (Thuan B. Nguyen) moved to America when he was 14, and was soon expelled from school for spending too much time playing underground poker games. After turning 21, Scotty Nguyen attended dealer school and got a job at Harrah's poker room where he gambled and lost most of his earnings in $3 - $6 stud games.

In 1985, Nguyen dealt in a No Limit Hold'em in tournament in Lake Tahoe. He would work during the day and play cash games all night, steadily building his bankroll up to $7,000. He returned to Vegas with this money and quickly gambled it up to $1 million. Nguyen then started winning between $50,000 and $100,000 a night at Ceaser's Palace. Shortly after though, Nguyens new fortune allowed his recreational drug use to turn into full-blown addictions, and he soon went broke as a result.
Nguyen has completely blown his winnings more than once, and in 1998 Mike Mautsow helped Nguyen out with a third of the buy-in for the World Series of Poker. Nguyen won the 1998 WSOP, and gave Mike Matusow a third of his winnings.

Nguyen is a very emotional player, and has often been criticised for his behaviour which has included drunkenness, swearing, and scolding of other players.