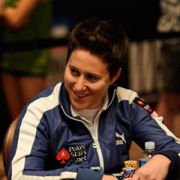 When Vanessa Selbst won $2,500 10-Game Mix 6-Handed event #52 at the 2012 WSOP, she became only the the second woman (the first being Jennifer Harman) to win a World Series of Poker bracelet in two open events.

Born in Brooklyn in 1984, Vanessa Selbst is one of the foremost female professional poker players, having already won two WSOP Bracelets and finished in the money several times in both World Poker Tour and European Poker Tour events.

V. Selbst is a student of the Yale Law School and plans to move into a career in the field of Civil Rights Law. She transferred to Yale from MIT (Massachussets Institute of Technology) where she took part in both intercollegiate Rugby and Tennis. During her time at Yale, Vanessa Selbst was head of the Queer-Straight Allicance.

Selbst is a member of Team Poker Stars pro where she plays under the name 'V. Selbst. On top of her impressive performance as a player, she is also a coach and executive producer for the DeucesCracked site where she has contributed several videos and coached over 70 students.