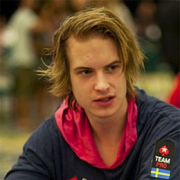 Known only to the world as 'Isuldur1' for years, Sweden's Viktor Blom managed to keep his identity a secret until 2011. Online poker forums and sites were filled with talk and speculation as to who this mysterious and hyper-aggressive nose bleed player was as they watched him take on huge names - sometimes raking massive pots, and at other times suffering enormous downswings.

Viktor Blom is renowned for having achieved the biggest run in online poker history, when he went up against Tom Dwan at six heads-up $500/$1000 No Limit Hold 'em tables on Full Tilt Poker. After five days of intense play Blom had taken around $5 million from Dwan.

In 2011 Viktor Blom signed with PokerStars. Since doing so, Blom has concentrated much more on live poker tournaments, and in January 2012 he won the first live tournament of his career, taking down the Super High Roller event at the PokerStars Caribbean Adventure to walk away with over one and a quarter million dollars. In February 2012, Viktor Blom finished 2nd in the €5,000 No Limit Hold'em Heads up event at the EPT Deauville. Even though Blom has recently taken in much more live poker play, his passion still seems to be super high-stakes online cash games.

Viktor 'Isuldur1' Blom now lives in London where, he says, he enjoys the anonymity the location affords him.