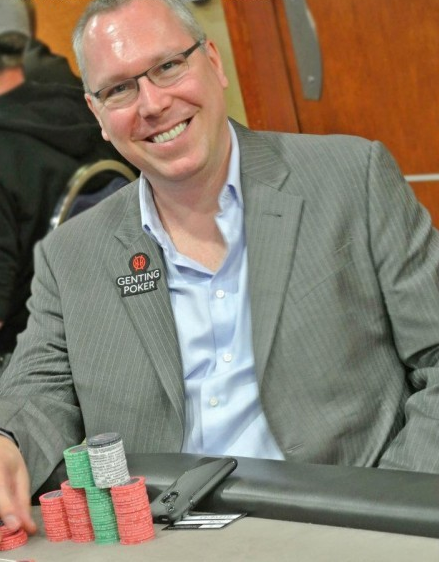 Joe Beevers is a Genting Poker Pro, original member of the Hendon Mob, and has written many articles for thehendmob.com as well as having contributed introductions and lessons to books on poker.

RTR: You’ve enjoyed a long and successful poker career – explain to us how and to what extent you think the game has changed since you first started playing...

Joe: It might make me sound old but so much has changed this could probably be an article rather than one question. Casinos in the UK had a 48 hour rule, they closed at 4am, they couldn't charge for running tournaments or rake pots and there was no online poker. There were lots of 'private' poker games. For us, we were doing something that we loved and it just happened to become so incredibly popular. As a result the biggest change is that the romance has gone to some extent. RTR: You’re well-known for appearing on Late Night Poker (every single series infact) – how important was the show in your success as a poker player, and did you feel any added pressure knowing it was being filmed?

Joe: Well the first time it was very new and I guess I was a little nervous but once you start playing all you think about are the decisions you are making at the table. LNP was THE first poker on TV and it definitely helped with deveolping our profiles, the Hendon Mob brand and with us getting sponsorship deals. RTR: What do you think is your most important achievement to date – in or out of poker?

Joe: I think we were very lucky and very well positioned but The Hendon Mob definitely played it's part in developing sponsorship in poker. We signed the first $1Million deal around 2003 and anything like that at the time was just unheard of. Many other pros got sponsorship as a result, it became acceptable. Also building and developing what is now the world's leading and number one database of live poker tournament results and the way that people talk about that makes us proud too. All you have to do is read the 'Testimonials' page on http://pokerdb.thehendonmob.com/
On a personal note I am very happy. I live in the country with my wife Claire and our 6 year old twins Millie and Lola. Life is good. RTR: You’re reputedly the only poker player from the Hendon Mob to have kept the nickname given by Victoria Coren – are you very fond of ‘The Elegance’ as a poker alias?

Joe: I wouldn’t say I’m fond of it but certainly seems to of stuck! At least it was given, I don't think players should 'choose' a nickname, it doesn't seem right. Actually I do quite like it lol RTR: You were sponsored by Full Tilt – what’s your take on the whole Full Tilt saga – particularly Howard Lederer recently speaking out in a series of interviews “The Lederer Files”?

Joe: I think that the whole FTP situation was very sad for a number of reasons. I felt sick when the news broke. I guess we may never know what really happened and there is and was certainly plenty of speculation. I am really glad that ROW players will have access to their player balances from November 2012 and I hope that USA players don't have to wait too long to get theirs too. RTR: On RakeTheRake’s pro profile for Joe Beevers, is the following ‘interesting fact’:

In 1997, Beevers won his first major event - The Master Classics of Poker, Amsterdam. Shortly after the win, at 3am, Beevers called his friend and then flatmate to tell him the news by singing Queen's "We Are The Champions" down the phone at him. It is not known how pleased Joe Beevers' flatmate was about this call.

...Could you fill us in on how exactly your friend felt about this over-the-phone celebratory serenade?

Joe: Nick, my flatmate at the time, is one of my oldest non-poker friends. You forgive old friends anything right? ;-) RTR: You’ve written lots of articles on poker, as well as having contributed to books in some form, and you’ve gave poker lessons from an early age. Given these achievements, have you come to consider yourself as filling more of an advisory or educational role, or do you still think of yourself as a poker player pure and simple?

Joe: I’ll always be a poker player, its the way I live my life and has always paid the bills. The Hendon Mob Ltd takes up a lot of my time on a day to day basis and from time to time I have been asked to contribute my opinion for articles etc but at heart I’ll always be a poker player. I still learn from others though, that's the thing about poker, you never stop learning. RTR: As a gambling man, and big West Ham fan – have you ever placed bets on your beloved Hammers? And indeed, ever bet against them!?

Joe: It's weird, when I used to go and watch them every week it was easier to predict what would happen, especially as we knew all the players strengths and weaknesses at that time. I don't think I could ever bet against them though, that would just be a no bet. RTR: Who do you most admire in poker and why?

Joe: Anyone that has stood the test of time. RTR: Finally... What’s next for Joe Beevers?

Joe: The Grand Final of the Genting Poker Series at the Fox Club London is coming up in December which I’m really looking forward to. I am also working on some new strategies for sports betting that are quite exciting. Watch out for a new website sometime in the coming months!