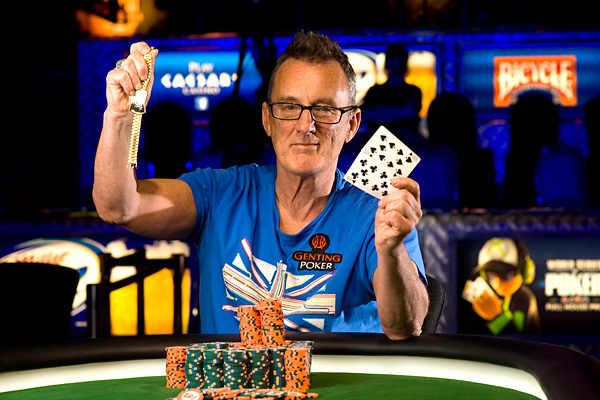 A Runner-Up No More
If there’s any truth to the statement that second place is the first loser, then Marco Johnson must’ve felt like poker’s biggest loser. After all, the Californian had finished runner-up in WSOP events three times, including second place in this year’s Event #31 $1,500 PL Omaha Hi/Lo tourney ($158,379). However, Johnson was finally able to enter the winner’s circle after taking down the Event #48 Six-Handed Limit Hold’em tournament. He earned a $206,796 top prize and a very gratifying gold bracelet.

Boatman wins the UK’s First Bracelet
Through 48 events, the UK had failed to win a gold bracelet at the 2013 WSOP. However, this changed when Barney Boatman battled through 2,247 players to win the Event #49 $1,000 No-Limit Hold’em tourney along with $546,080. England couldn’t have picked a better person to win their first bracelet either since Boatman is one of the true pioneers of British poker. The famed player and writer is part of the legendary Hendon Mob, which became famous for dominating underground poker games throughout London.

No Men allowed
Earlier this summer, WSOP officials instituted a $10,000 buy-in for the Ladies Hold’em Championship, but gave women a 90% discount. The message was simple: guys stay out! Canada’s Kristy Bicknell certainly had no problem with this as she won the Ladies Hold’em Championship along with $173,922. Bicknell has some great online poker results, but earned just her first WSOP cash in 15 tries. Following the win, she joked, “I guess this is pretty good for my first cash.”