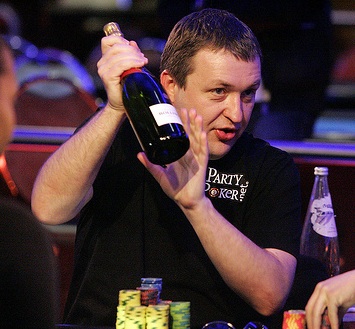 Months ago, Antanas Guoga (a.k.a. Tony G) announced that he is going to be running for a Lithuanian European Parliament seat. And with elections taking place on May 24th, the Liberal Party candidate may soon be embarking on a serious political career.

With just three months left until the elections happen, Tony G has announced a "farewell tour." The first stop on the tour was the £500,000 Main Event at the Sky Poker UK Poker Championships. Featuring a number of prominent British pros such as Sam Trickett, Barny Boatman and JP Kelly, this was an excellent event for Tony to kick off his tour.

As for where else he'll play in the last few months before the Parliament elections, Gouga has yet to make any announcements. He's mainly played at European tournament stops over the past three years so we can assume that he'll probably stay on one continent during the farewell tour.

Tony has gained a great deal of fame for his wild antics at the poker table. Some of his memorable TV rants include taunting Surinder Sunar before they played heads-up in the 2004 WPT Grand Prix de Paris, ridiculing Ralph Perry during the 2006 Intercontinental Poker Championship, and angering Dave 'Devilfish' Ulliot on the PartyPoker Premier League. Given his penchant for humiliating opponents in order to gain the upper hand, Tony G should do quite well in the political world.